The 67m tall Sky Tower is indeed the tallest building in the Expo site. The exterior looking like a giant harp would catch visitors’ eyes and at the same time, its story related to its birth delivers the message of eco‐friendly “Green Expo”. 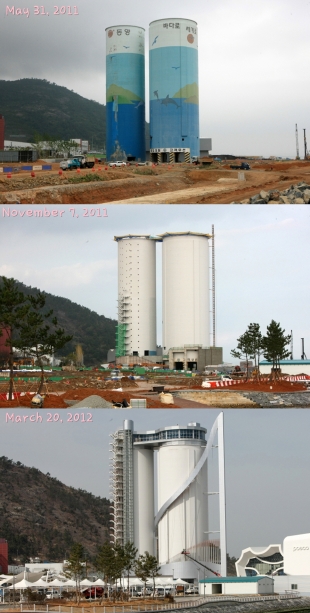 -from an abandoned silo into the Sky Tower-

The Sky Tower had been used as ‘silo’ – a structure for storing cement – which been a kind of symbol of the industrialization era by supplying about 50,000 tons of cement – entire area of Yeosu every year for more than 30 years from 1980s. However, efforts made by lots of people enabled two abandoned silos to be turned into the representative eco‐friendly landmark though it could have been left as industrial waste. Those involved staffs had successfully overcome dangerous moments when they eliminated those cements. 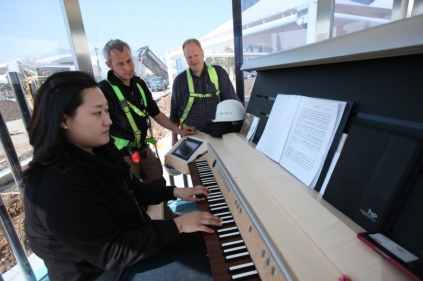 The outer wall of the Sky Tower is a pipe organ, named Vox Maris (the Latin, meaning ‘sound of the ocean’). The exterior shape of a harp symbolizes a giant pipe organ. This pipe organ produces sounds which spread up to 6km radius and was listed as the world’s loudest pipe organ in the Guinness Book of World Records in October last year. Visitors can play the pipe organ using smart IT appliances themselves so it is expected to be loved by visitors who love music. Personnel who participated in the building completion ceremony on April 12 said that they were fascinated by its romantic ocean with beautiful organ sounds.

Besides, there is a desalination facility in the first floor of the Sky Tower, which distills sea water into fresh water. Visitors could watch the desalination process and try the fresh water. Plus, the cup for trial would be offered as a souvenir for visitors. 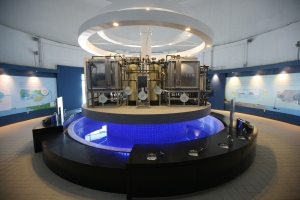 -a desalination facility inside of the Sky Tower-

Sky Tower will be permanently preserved as a symbolic landmark which presents the new oceanic era humans shall to move toward in the future after the Yeosu Expo.