Yeosu is located midway along the south coast of the Korean Peninsula. It borders Namhae, South Gyeongsang Province, to the east and Goheung, South Jeolla Province to the west. It also shares boundaries with Suncheon to the east and Jeju Island to the south.

Yeosu is also home to one of the largest national industrial complexes, which serves as a backbone not just of the local economy but also of the national economy.

The bigger the better. In the case of Jinnamgwan, that just might prove true. Standing 14 meters high and 54 meters long, this impressive building is the biggest single story wooden structure in Korea. It was originally a command post for naval leader Yi Sun-shin (1545-98) and then served various official purposes. Besides its gargantuan proportions, Jinnamgwan most striking quality is its rugged and rustic appearance, giving it character.

Hyangilam, which literally means “hemitage facing the sun,” is one of Korea’s four major prayer sites to the Buddhist Goddess of Mercy. With its lush forests of camellia and subtropical plants, its oddly shaped rocks surrounding Mount Geumosan, and clear, open waters, the temple makes for a grand spectacle. Watching the sun rise over the horizon is a sight no easily matched, as demonstrated by the fact that the temple holds the Hyangilam Hermitage sunrise Festival on New Year’s Day each year. 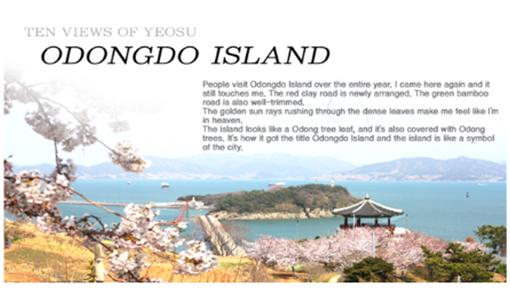 Odongdo Island earned its name because of the shape of the island looks like an Odong tree leave, and also the island was covered with Odong trees. It’s rocky coasts have cliffs here and there. You can also see many sea caves, tafoni, and arches around the coast.
It takes about 10 minutes from Yeosu downtown. You also have to walk about 15 minutes along the breakwater to get to the island. There are also mural paintings on the breakwater which are the works of artists from Yeosu Branch of Korean Fine Arts Association. The road is selected as the 100 best beautiful roads in Korea.

– Dongbaek Train
The Dongbaek Train has been carrying visitors since 1996. The train accommodate 108 passengers at the same time, and runs 1,200m along the breakwater for the convenience of visitors.

– The Lighthouse
There is a lighthouse on the top of the Odongdo Island. It’s 27m tall and they have displayed data and materials about the lighthouse and sea. There is no admission fee, so feel free to go up to the observatory and enjoy the view of the sea.

The Dolsan Bridge, a 450-meter cable stayed bridge, boasts an adjoining park which commands a view of Yeosu Harbor, the sea, and neighboring islands and presents an impressive, colorful nightscape created by the bridge’s pier columns. Blending seamlessly with the night scene of Yeosu Harbor and Jinnamgwan, the bridge imparts an exotic aura.

Combined with the glittering downtown lights, the nighttime illumination of the Dolsan Bridge, which changed every quarter hour, creates a wonderful nightscape reflection on the sea. The bridge exhibits a brilliant array of colors that look just like watercolor paints. It is hard not to get in a romantic mood when gazing out at Yeosu Harbor.

From the Dolsan Park, the night scenery panorama of the bridge and the downtown comes into view. The lights of ships on the seawater are also beautiful. The movements of vessels along the flash of lighthouse mesmerize people passing by.

The festival takes place every early April when azaleas bloom in Mt. Yeongchwi. Azaleas are considered to be a guardian of the Yeosu peninsula. Visitors can enjoy a variety of activities including photo contest, Miss Azalea beauty pageant and traditional food festivals.

The Yeosu Great Turtle Ship Festival sheds new light on the military history and culture and the arts of Yeosu, former headquarters of the Jeolla Jwasuyeong (Left Jeolla Province Navy), and promotes the city as a shrine to national salvation. The festival has been held annually since 1967, beginning on May 3, the eve of the festival. One of Yeosu’s major festivals, it includes the spectacular Tongjeyeong Parade and a diverse array of other events that invite public participation and hands-on experience. The greater Turtle Ship Festival consists of the Jinnamje Festival, Great Turtle Ship Song Festival, Dolsan Got Kimchi Festival, and Seafood Festival.

This international festival is meant to promote international exchange, cultural activities and local culture among teenagers. The event features a teenager interchange camp, Daensong contest and various programs for experience and exhibition.

Under the special theme of mud flat and sunset, this festival offers various opportunities to use your five senses.

The name of the festival means the “hermitage facing the sun” where you can watch the sun rising over the horizon of the South Seas. There is the beautiful coastal road that takes you to the hermitage surrounded by picturesque scenery consisted of camellia and unique shaped rocks of Mt. Geomo.